Posted by Wael Baseem on September 23, 2018
Posted in: NEMSIS نمسيس. Leave a comment

The origins of the Horus stelae

During the New Kingdom there were round-topped amulets with a depiction of a young regal god in similar pose as the child god on the later Horus stelae, but in profile, and named in the accompanying hieroglyphic inscription Shed ‘the saviour’.

A late Ramesside papyrus in Vienna preserves a handwritten copy of an incantation, to be recited for the same purpose as the later Horus stelae, and is followed by the oldest surviving description of such an amulet. From the same period, there is a statue of king Ramesses III, found on the desert road from the city of the sun-god Iunu (Heliopolis), with some of the same group of incantations.

In the Ramesside and Third Intermediate Period there are examples with the figure of the child god in high relief, named as Horus, and bearing incantations. On some examples there is an incised depiction of the young regal god, named Shed ‘the saviour’, in a chariot hunting dangerous animals. Some of these example are dated to the reigns of kings Osorkon I and Osorkon II of Dynasty 22.

The inscriptions on the Horus stelae

The larger Horus stelae include series of incantations, and are often numbered from the sequence on the Metternich Stela, first edited by W. Golenischeff, later by C. Sander-Hansen; of these, numbers 5 and 10 appear with particular frequency on the more select smaller versions. On the large example in the Petrie Museum, UC 16547, a version of incantation 5 covers lines 1-10 on the back, with incantation 10 in the following lines 11-15. Metternich stela incantation 5 is also found on a fine middle-sized example, UC 16548.

Over time the carvers of the amulets produced more shapeless renderings of the signs; Sternberg-el-Hotabi 1994 documents the process of this dissolution of the script during the Ptolemaic Period. By the first century AD, the raised relief image of the divine child had been replaced by a profile figure, and the inscriptions were shorter incantations in the Greek script. These transitional forms were replaced by the smaller Roman Period amulets known in modern times as ‘gnostic gems’, carved from hard and often semi-precious stones, with images of deities or demons and short Greek inscriptions (example UC 52226); these circulated widely in the Mediterranean.

O aged one, who rejuvenates himself in his time!
Elderly one, who achieves youthfulness!
Cause Thoth to come to me at my voice, that he may drive back for me the Backward-faced.
Osiris is on the water, the eye of Horus is with him, the great winged scarab is spread over him,
great in his grasp, creating gods as a child.
May the one on the water emerge intact.
If the one on the water is approached,
the weeping eye of Horus is approached.
Back, you who are in the water!
You enemy, dead male or female, adversary male or female, etc.
Do not raise your faces, you who are in the water, at the passing of Osiris by you.
Let him by to Djedet, with (your) mouths covered, your gullets blocked.
Back, rebel! Do not raise your faces against the one who is on the water.
It is Osiris.
Ra has boarded his ship to see the gods of Kheraha,
the lords of the underworld who stand to slay you.
If the Backward-faced comes against Osiris while he is on the water,
the eye of Horus is on him to capsize you, placed on your backs.
O you who are in the water, your mouths are sealed by Ra,
your gullets are blocked by Sekhmet,
your tongues are cut off by Thoth,
your eyes are blinded by Heka,
those four great gods who make the protection of Osiris,
they are the ones who make the protection of the one who is on the water,
all people, all animals who are on the water today – protection.
Those who are on the water – the protection of heaven, while Ra is within it,
protection of the great god at the fore of the robing-chamber,
is the protection of the one who is on the water.
A voice of great lament in the temple of Neit,
a loud voice in the Great Temple,
a great cry of mourning in the mouth of the cat.
Gods and goddesses say
‘look, look at the abed-fish, it is born’.
I have turned back your advance, rebel!
I am Khnum lord of Herwer.
Beware of repeating your injury a second time
to that which you did in the presence of the Great Ennead.
Be repelled, turn back for me,
I am a god.
Hey, hey! I have said.
Can you not hear the sound of the great lament from the night,
on the shore of Nedyt,
the sound of the great cry of all gods and all goddesses,
a wailing over the violence that you inflicted, evil rebel?
See, Ra rages at the violence over it,
and commands your execution.
Back rebel – hey, hey!

Hymn to Horus to transfigure him,
spoken on water or on land.
Words spoken by Thoth the nurturer of the god of Pe.
Hail god son of a god!
Hail heir son of an heir!
Hail bull son of a bull! born of the goddess
Hail Horus emerged from Osiris, born of Isis the goddess.
I have spoken with your name,
I have recited from your words of power,
I have spoken with your words of light,
I have conjured with your speech,
created by your heart.
It is your formulae which come from your mouth,
commanded for you by your father Geb
given to you by your mother Nut,
taught by your brother Khentykhem
to make your guard,
to repeat your protection,
to seal the mouth of every serpent of those in the sky, those on the land, those in the water,
to make people live,
to make the gods content,
to transfigure Ra in your glorifications.
Come to me quickly today
as you have made a boat sailing.
Repel for me every lion on the desert slope
every crocodile on the river,
every biting mouth in their cavern
Do it for me like the stone of the desert mountain, like the sherd edge in the street.
remove for me the posion of the bite which is in every limb of the patient,
so that your words are not rejected on account of it.
See, your name is called today.
May you create the raising of your renown, when you have lifted by your words of light.
May you cause the sufferer to live for me,
so that adoration is given to you by the populace.
The two goddesses Right are adored in your forms,
all gods are called in your likeness,
see, your name is called today.
I am Horus the saviours. 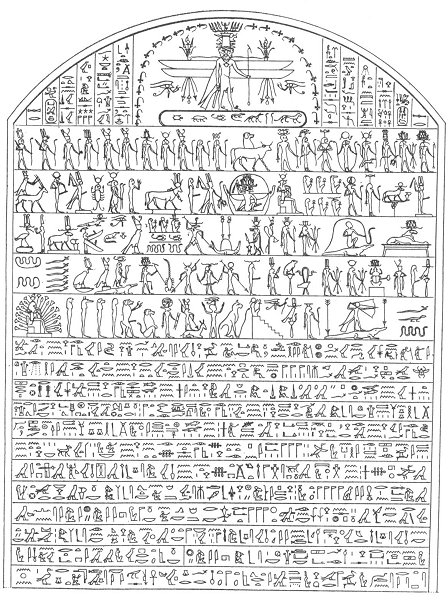