1400 years ago infidiles asked Mohamed the prophet to split the moon for them to believe, so he asks God who splits the moon two halves where a mountain was in between, then put back, so they said; this is magic ?

Now NASA comes and proves that the moon was once split, even though they say we’re not sure how long ago did that happens, well it was 1400 years ago

We all should draw that fine line between miracles, magic and science or we all will get deceived and lost 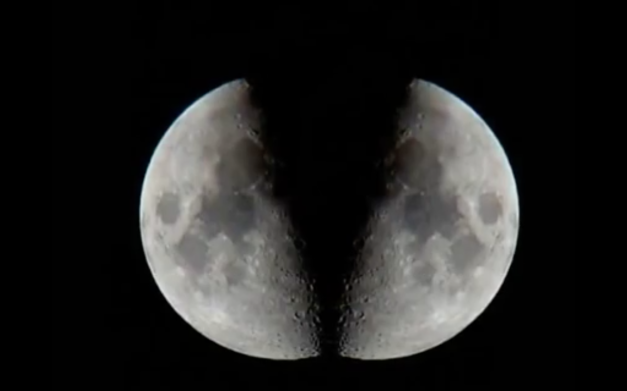 New images from NASA’s Lunar Reconnaissance Orbiter (LRO) spacecraft show the moon’s crust is being stretched, forming minute valleys in a few small areas on the lunar surface. Scientists propose this geologic activity occurred less than 50 million years ago, which is considered recent compared to the moon’s age of more than 4.5 billion years.

A team of researchers analyzing high-resolution images obtained by the Lunar Reconnaissance Orbiter Camera (LROC) show small, narrow trenches typically much longer than they are wide. This indicates the lunar crust is being pulled apart at these locations. These linear valleys, known as graben, form when the moon’s crust stretches, breaks and drops down along two bounding faults. A handful of these graben systems have been found across the lunar surface.

“We think the moon is in a general state of global contraction because of cooling of a still hot interior,” said Thomas Watters of the Center for Earth and Planetary Studies at the Smithsonian’s National Air and Space Museum in Washington, and lead author of a paper on this research appearing in the March issue of the journal Nature Geoscience. “The graben tell us forces acting to shrink the moon were overcome in places by forces acting to pull it apart. This means the contractional forces shrinking the moon cannot be large, or the small graben might never form.”
This shows the largest of the newly detected graben found in highlands of the lunar farside. The broadest graben is about 500 meters (1,640 feet) wide and topography derived from Lunar Reconnaissance Orbiter Camera (LROC) Narrow Angle Camera (NAC) stereo images indicates they are almost 20 meters (almost 66 feet) deep. (Credit: NASA/Goddard/Arizona State University/Smithsonian Institution)

Graben are troughs formed when the lunar crust was stretched and pulled apart. This stretching causes the near-surface materials to break along two parallel normal faults, the terrain in between the twin faults drops down forming a valley. (Credit: Arizona State University/Smithsonian Institution)
› Larger image

The weak contraction suggests that the moon, unlike the terrestrial planets, did not completely melt in the very early stages of its evolution. Rather, observations support an alternative view that only the moon’s exterior initially melted forming an ocean of molten rock.
In August 2010, the team used LROC images to identify physical signs of contraction on the lunar surface, in the form of lobe-shaped cliffs known as lobate scarps. The scarps are evidence the moon shrank globally in the geologically recent past and might still be shrinking today. The team saw these scarps widely distributed across the moon and concluded it was shrinking as the interior slowly cooled. 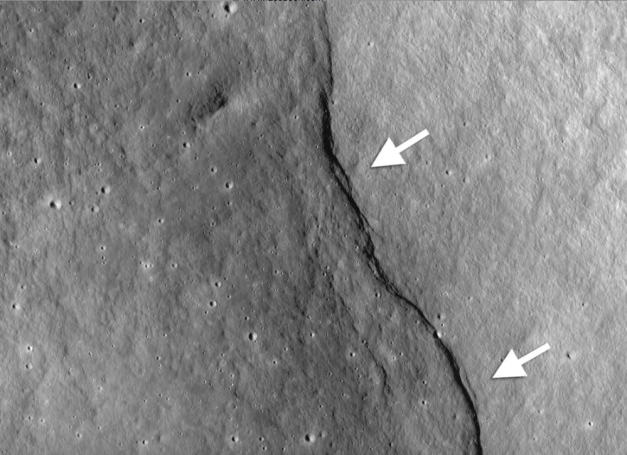 Based on the size of the scarps, it is estimated that the distance between the moon’s center and its surface shank by approximately 300 feet. The graben were an unexpected discovery and the images provide contradictory evidence that the regions of the lunar crust are also being pulled apart.

As the LRO mission progresses and coverage increases, scientists will have a better picture of how common these young graben are and what other types of tectonic features are nearby. The graben systems the team finds may help scientists refine the state of stress in the lunar crust.

“It was a big surprise when I spotted graben in the far side highlands,” said co-author Mark Robinson of the School of Earth and Space Exploration at Arizona State University, principal investigator of LROC. “I immediately targeted the area for high-resolution stereo images so we could create a three-dimensional view of the graben. It’s exciting when you discover something totally unexpected and only about half the lunar surface has been imaged in high resolution. There is much more of the moon to be explored.”

The research was funded by the LRO mission, currently under NASA’s Science Mission Directorate at NASA Headquarters in Washington. LRO is managed by NASA’s Goddard Space Flight Center in Greenbelt, Md.

Magnetic Rocks: Moon rocks were magnetized. This is odd because there is no magnetic field on the Moon itself. This could not have originated from a “close call” with Earth—such an encounter would have ripped the Moon apart. There have been many theories that aim to explain this magnetism however they all still sit as theories.

Late logical examination has affirmed the wonder of Prophet Muhammad Al-Mostafa (peace be upon him and his sacred offspring) in regards to “moon part”.

It has been demonstrated through a photo caught by NASA which was distributed all through the world.

The photograph from NASA utilizing Apollo 10 and Apollo 11 demonstrates an unmistakable sign (a line) that the Moon was part in past.

The report, spread on logical establishments in various worldwide parts, said that the photo which outlines part of moon affirms that the moon was part into two parts amid its land age. The report said the researchers were not able give any experimental clarification for happening of ‘moon part’ as any such part was never happened to any eminent body preceding what happened to the moon. The geologists declare that it is outlandish that such a line shows up recovery the moon was part into two parts and afterward it was rejoined.

This supernatural occurrence of the Prophet (peace be upon him and his heavenly offspring) is said in the start of Sura Al-Qamar (the moon) about the split of the moon [54:1] ‘The Hour has moved close, and the moon has been parted into pieces (the general population of Makkah asked for Prophet Muhammad to demonstrate to them a marvel, so he demonstrated to them the part of the moon)’.